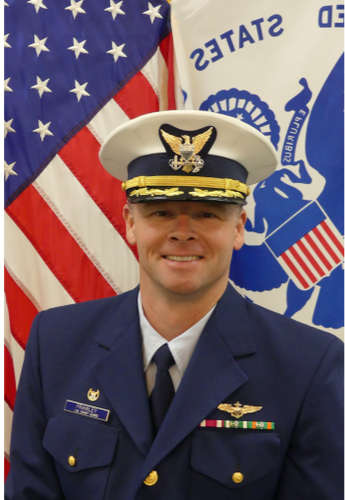 Bios
Commander Mike Frawley graduated from the U.S. Coast Guard Academy in 1997 with a Bachelors of Science in Government. Upon graduation, he was assigned to the 180-foot ocean going buoy tender, CGC GENTIAN (WLB 290), as a Deck Watch Officer, and was then “cross-decked” to the 225- foot buoy tender CGC ELM (WLB 204) upon GENTIAN’S decommissioning in 1998. He entered USN flight school in March 1999 and earned his wings of gold in May 2000. CDR Frawley’s first aviation assignment was as an HH-60J helicopter pilot at Coast Guard Air Station Elizabeth City, NC from 2000-2005 where he was selected for Coast Guard Aeronautical Engineer Officer training. He completed the Aero Engineering syllabus in May 2005 and was assigned to USCG Sector San Diego, CA as the Assistant Aviation Engineer Officer. In June 2009, CDR Frawley was assigned as the Engineer Officer to CGAS Sitka, AK. From August 2011 to July 2012, he attended Purdue University’s Krannert School of Management, where he earned a Master’s of Science in Industrial Administration (MSIA) and then transferred to USCG Headquarters, Washington, DC. While at CGHQ from 2012 through 2016, CDR Frawley served in the Office of Aeronautical Engineering in a variety of roles. From June 2016 through June 2018, he was assigned as USCG Sector San Diego's Air Station Executive Officer and Sector Logistics Officer. He took over command at Coast Guard Air Station Sitka on 28 June 2018. CDR Frawley has approximately 3700 flight hours including over 3500 in the Sikorsky H-60. In addition to his MSIA, he earned a Master’s of Aeronautical Science in Safety Systems from Embry-Riddle Aeronautical University, as well as completing his DOD Joint Professional Military Education Level I with the US Marine Corps Command and Staff School, College of Continuing Education.